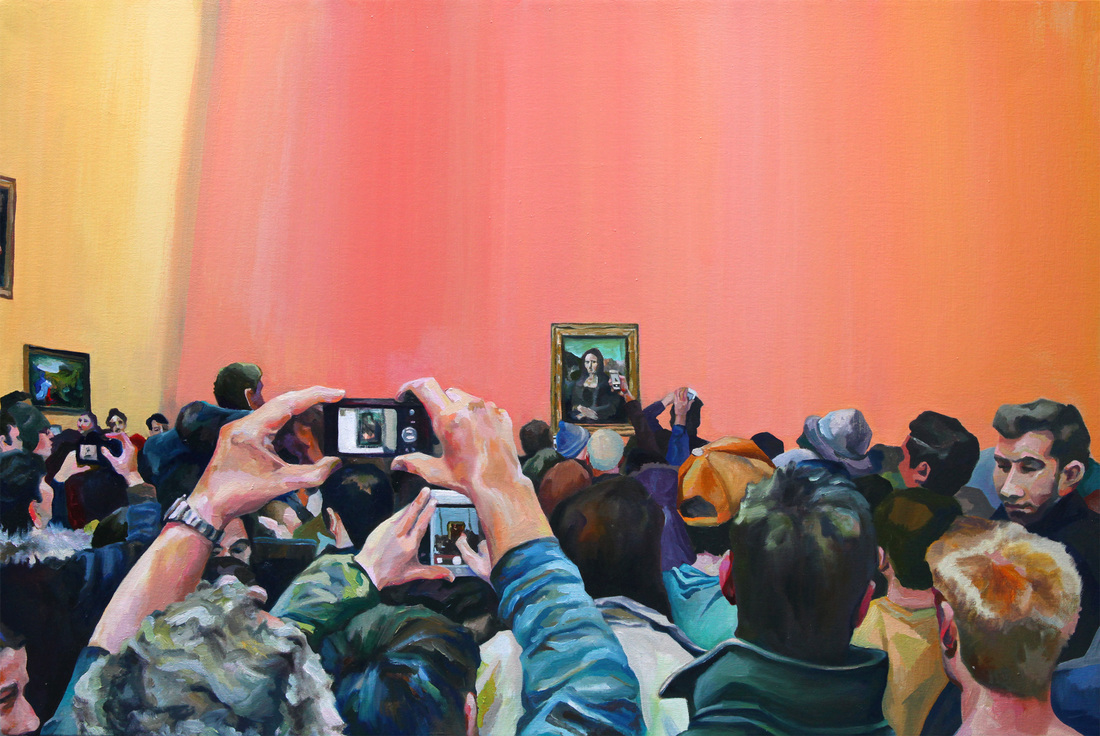 Michelle Ramin won the San Francisco Bay Guardian 2014 Goldie Award for Excellence in Visual Art. She has exhibited her paintings in San Francisco, New York, Portland, Nashville, New Orleans, and in the UK. She was born in North Central Pennsylvania and currently lives and works in San Francisco. Ramin studied at Penn State University and received an MFA from the San Francisco Art Institute. Her work has appeared in New American Paintings, SF Chronicle, SF Weekly, Beautiful Decay, 580 Split, and is included in the Jimenez-Colon permanent collection in Puerto Rico. A solo exhibition of Ramin’s work opened at the Duplex Gallery in Oregon on 2 June 2016. 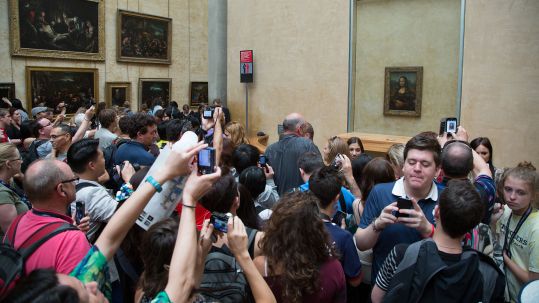 ‘Crowd looking at the Mona Lisa at the Louvre’, photograph by Victor Grigas.

Williams: I was in the Louvre probably decades before you, and before the space in which the ‘Mona Lisa’ is hung was renovated. Nothing important about the experience appears to have changed. There were no ‘smartphones’ then, but there were lots of cameras. A large group of people, which seemed to be moving as a pack from room to room, ignored every other picture in the Denon wing. Your painting, ‘Mona Lisa IRL’, does a number of interesting things with this scene, which must now be familiar to most tourists who visit Paris. To my mind, the most important thing you do is confidently announce that paintings are as good or better than photographs at contemplating our now surreal relationship with images and art. The virtual ‘Mona Lisa’, one we might see on the Louvre website, is somehow more real than the ‘Mona Lisa’ in real life.

Ramin: Yeah, I think that’s interesting—the idea of the ‘Virtual Mona Lisa’ vs. Mona Lisa ‘IRL’. She’s more famous as a replicated digital or printed image than as an actual painting. When I got into the room, I kinda stopped caring about the painting itself. In that moment, I was able to check it off my tourist list of things to see. I didn’t get very close and could honestly barely make out that it was the ‘Mona Lisa’, except for the huge crowd around her. It mattered to me more to be experiencing the way in which people experience her rather than getting close to the actual painting and observing the brush strokes, colors used, composition, size, etc. I studied all of that in school but all that knowledge didn’t mean a thing when I got into that room. It was then that I realised I wanted my next body of work to be about crowds of people observing famous pieces of art. It’s interesting to me that some people find the need to check certain famous pieces off of a list—as in the Louvre brochure—while others spend minutes or sometimes hours studying the same piece. It’s like this at concerts, too, and other cultural institutions and happenings. Something about hype and fame—the bragging rights involved—that really draws people, but perhaps for the wrong reasons. Then again, who am I to judge how people should and should not experience something?

Williams: Digital photography has become the standard method of certifying experience in a way that seems more reliable and objective than memory… until the drive fails or your cloud is hacked. Your paintings of subjects inside the Louvre and the Musée d’Orsay are also about the spectacle of art and the hype surrounding it. To experience this as a tourist or art lover is one thing, but artists experience the spectacle and hype of the art world in a different way, as I suspect you are finding now you have several exhibitions of your own coming up.

Ramin: Hype is a very real and intimidating phenomenon, especially now with the advent of social media. As young as I am (thirty-four), I still remember the days without computers, cell phones, internet, etc. Word of mouth and the printed word were the only way to get information out there. Now, there are so many ways—so many websites, blogs, apps, etc.—I can’t keep up, nor do I want to. The popular way to virtually socialise changes constantly. A week out from the opening of my solo exhibition ‘Jet Lag’, at Duplex Gallery in Portland, Oregon, and I find myself full of anxiety over whether or not I sent press releases to the right people. Who are the ‘right’ people? Even a few years ago, it was so much clearer. All I’ve been seeing this week is an ocean of faceless art blogs and Instagram accounts. I find myself feeling very much like I did in the congested museums of Paris—alone in a crowded room, and very overwhelmed. This is all part of the process, of course. The art making is the easy part for an artist. It’s everything else that is so difficult.

Williams: The recent gallery paintings are unusual in your body of work because they have not edited out the architecture and environment of the subjects. In much of your other work, for example ‘Ben and Travis Find a Tube’ [Watercolor on Paper, 22″ x 30″, 2015], the setting is missing and only the subject and action is left. Something that may have started out being a photograph or a memory, or both, ends up being a pictorial distillation. Can you tell me something about your editorial process, about how you decide what gets left in and what gets cut out, about how you decide what your real subject matter is?

Ramin: I’ve always been a very focused person. I have a tendency to focus so much on one thing that I miss all the details surrounding the thing. Most of my work over the past five years has been intentionally editing out the background or surroundings of the figures—mostly because I, myself, only really cared about the subjects and their actions. The rest seemed superfluous. I wanted the viewers to see what I was seeing, which was the interaction and relationships between the figures, and nothing else. My newest body of work is about something a little different—still about people, their interactions with each other, but also their interaction with the unique space that constitutes a museum. There’s so much weight to a museum—historically, of course, but also architecturally. It’s contextually important for me to include this unique environment in the paintings. I didn’t want to introduce backgrounds again until I knew for sure it provided something important and relevant to the works’ content.

Williams: Some of your other projects, from 2011 and 2012—the installations ‘Mask Booth’ and ‘Try it on’—appear to invite or challenge people to try on something that in Australia we call a ‘balaclava’. It makes everyone look like a criminal, or like they’re on a polar expedition. What is this about?

Ramin: When I was in graduate school, I took up the mask, or balaclava, as a multi-layered, politically-charged symbol representing various identities. I used this metaphor as a way to discuss hidden identities, subcontexts, in each of our personalities. By putting on the mask, one takes on a new and very different identity. The body of work relating to masks centered around private vs. public personas and the existence of this doubling in everyone. This theme can be extended to include social media personas and public branding as well. At the time, 2011–2012, the Occupy Movement in the Bay Area was ramping up, the punk band Pussy Riot was very active politically and the film ‘Spring Breakers’ had come out. When I began the mask series, these cultural icons weren’t present, but by the time I was in the midst of the series they were. A form of the collective unconscious, I suppose. It seemed like the balaclava was on everyone’s minds, so it felt like a very relevant representation of that moment, especially following the 2008 recession and being an election year here in the U.S.

Williams: Yes, and by the time this zeitgeist filters through to your watercolor and pencil drawings, something else has happened. The hidden, masked self is perfectly domesticated and comfortable on the sofa. ‘Three aliases’ [Colored Pencil on Paper, 22 x 30 inches, 2011] is both funny and disturbing.

Ramin: I am absolutely a worrier! —In all aspects of my life. At this point in my career I care very much about what people think and how the work will be received. I want it to be accessible to everyone but I also want it to function on a higher level, where artists, critics, historians, etc., can gather more information from the work. I don’t want to choose sides. I want it all, really. Doesn’t everyone?

Williams: Maybe. The path we take to get to where we are seems less important at the start than when you get to near the end. That’s the difference between being thirty-four and fifty-eight.

We’ve touched on how technology now mediates how we experience art. This means that art is made by people who have seen more art than ever before. What have you been looking at recently? What have you discovered?

Ramin: The last art I went to see was at the San Francisco Art Institute (SFAI) and California College of the Arts (CCA) MFA thesis exhibitions. They are the annual displays of graduate students’ work. I love checking out the work of emerging artists coming out of graduate art programs. A lot of the work is missing steps but some is extraordinary. There’s such a refreshing feeling to young (in career, not necessarily age) artists’ work: the best of the showings can be invigorating and inspiring, like Laura Rokas and Robin Crofut-Brittingham. The worst is still really intriguing because it’s candid in its failure: no censorship, just letting it all hang out. I appreciate that on a lot of levels. That’s what graduate school is for… Experimentation and failure: something that should be encouraged more in post-graduate work and, honestly, in our daily lives.

Related links on other sites